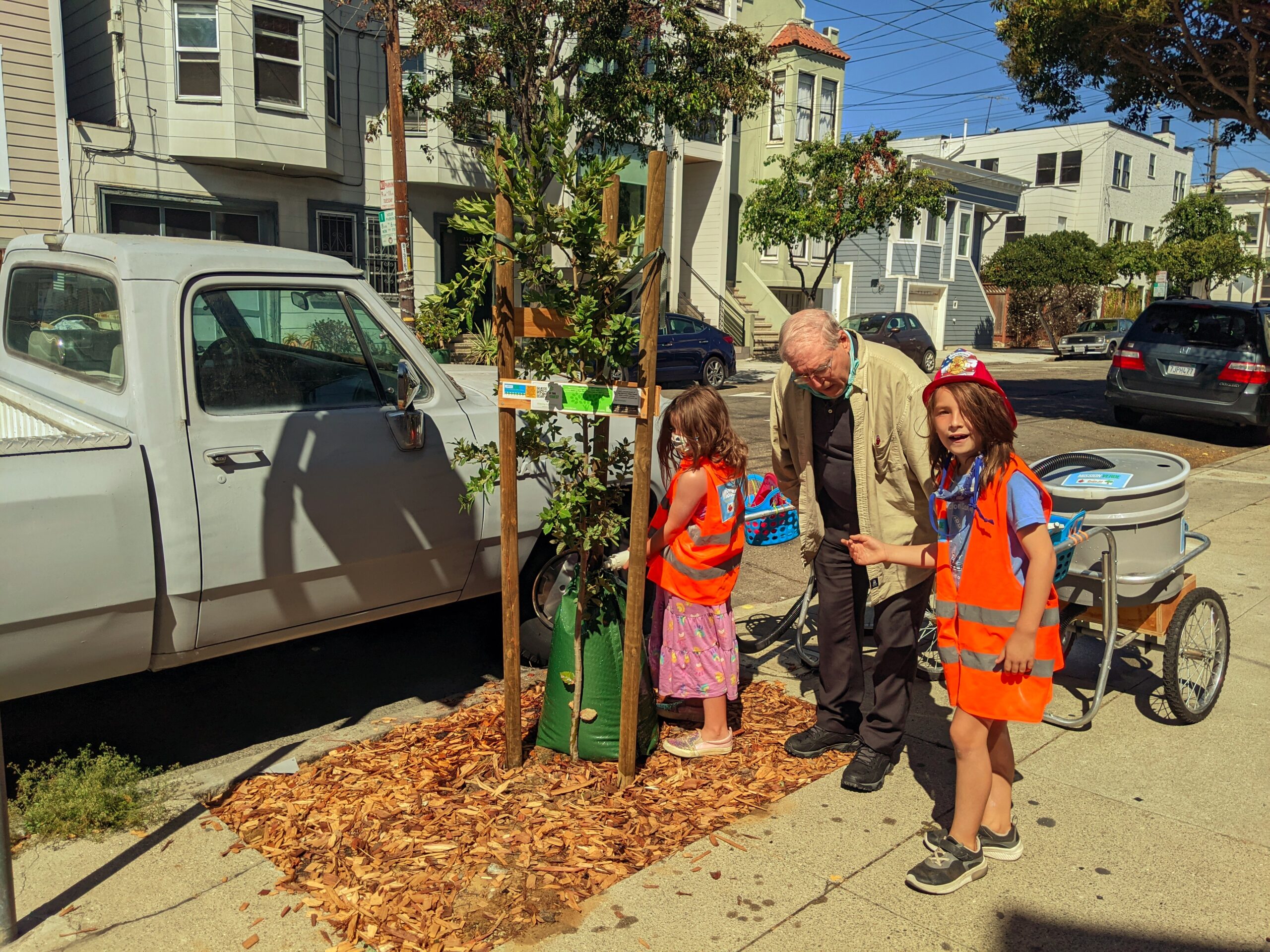 The author and grandchildren watering Mission Verde trees near 24th St with a pushcart.  Granddaughter Holly is doing all the work, grandson Rowan is looking on. 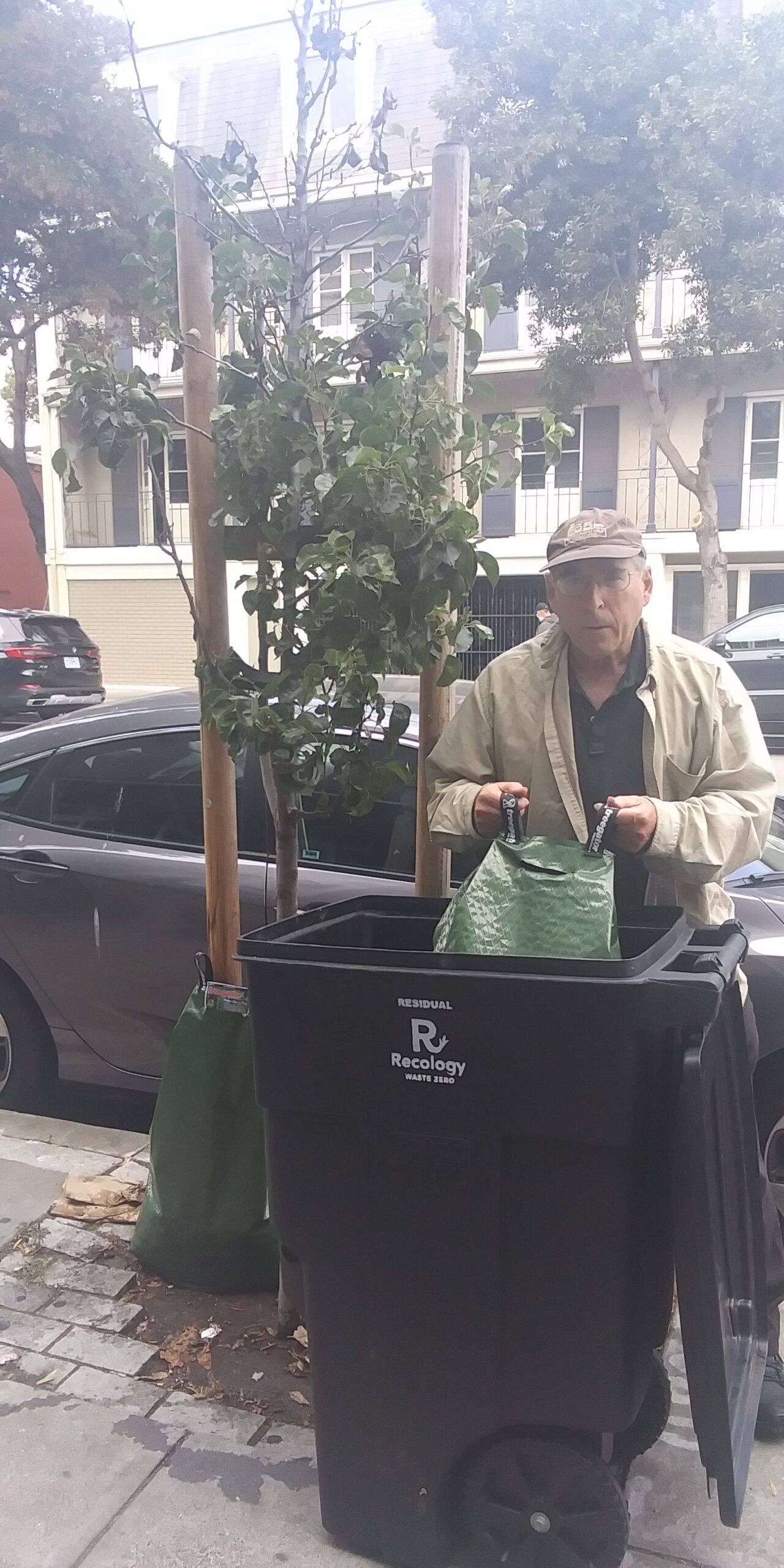 The author using a wheelie bin to water the 2335 Mason St tree, that was dying because it was never added to the DPW watering list.  North Beach naturalist Judy Irving is watering a tree at 1714 Stockton for the same reason. 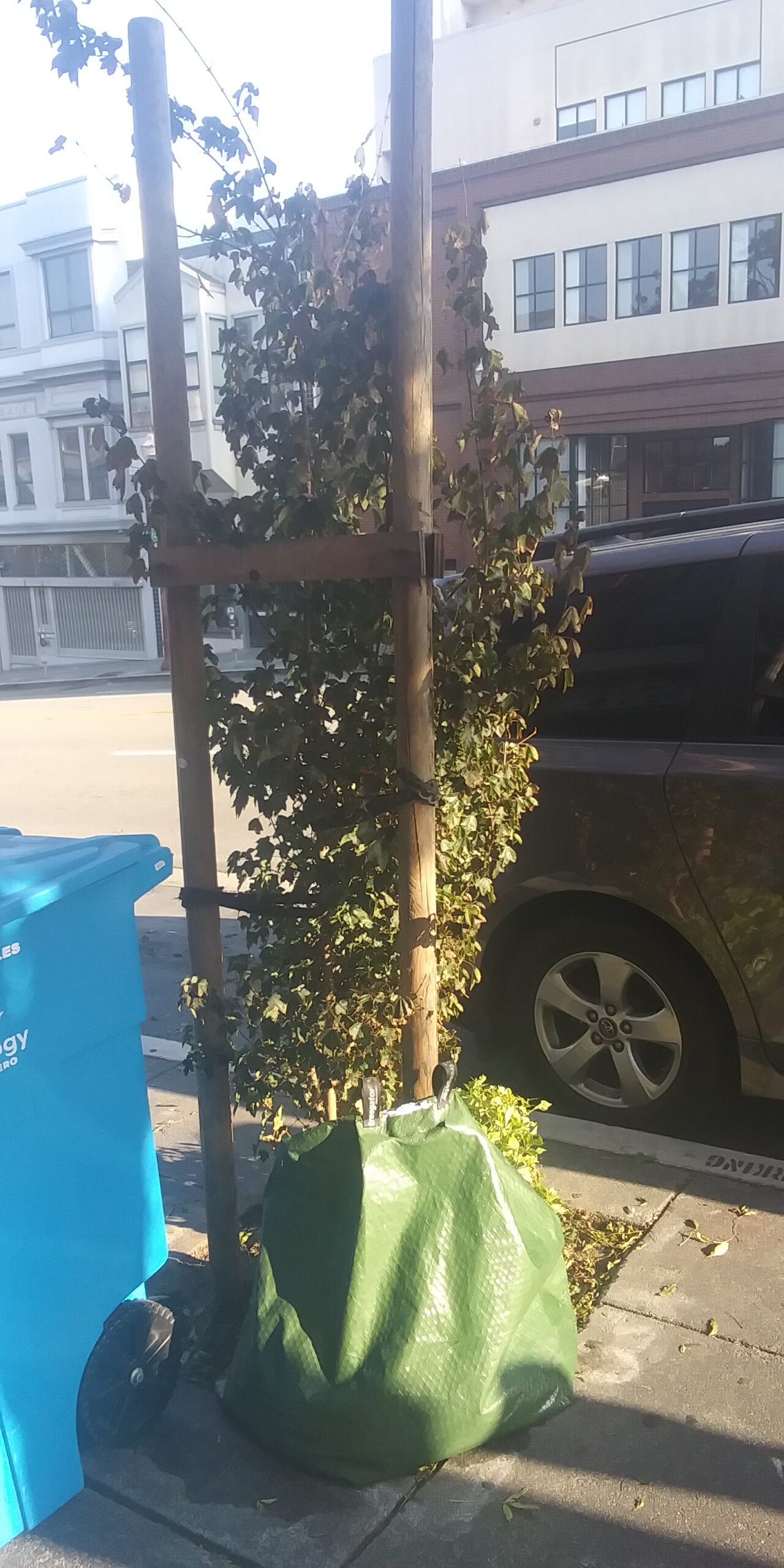 The poor tree at 350 Broadway is on the DPW watering list, but is never watered by DPW.  Shown above, another wheelie bin watering rescue.

San Francisco has a difficult  problem watering about 2,200 newly-planted trees annually: 2,200 trees is all the city can water on its $1.3 Million budget.  However the reality is that only half the trees are being watered due to watering crew mismanagement — the trees that are not watered do not establish well, or die and must be removed.

In North Beach we have 60 newly-planted trees that need weekly watering.  I have been auditing a 20-tree sample  each Tuesday just after the Public Works Bureau of Urban Forestry (BUF) crew finishes watering.  The result: fewer than half are watered.  (I’m not an arborist but no special training is needed to check if a tree has been watered: a full water bag weighs about 170 lbs, an empty bag can be lifted easily. )

On two occasions all 20 trees were watered, June 1 and June 8, 2021.  That is how it is supposed to work.   I have asked BUF Superintendent Carla Short  to assign that crew to North Beach permanently, but that has not happened.  We have the crew that does less than half the trees.   It seems this is the norm throughout the city.

Other trees in the city

The Guerrero St median from Duboce to 21st St in the Mission was promoted as a signature landscaping project, which includes 14 trees and 65 landscape plants.  When I first started auditing this planting in May 2021 trees were not being watered, and the landscape plantings were watered infrequently.  By July 2021 all BUF watering had  ceased, despite the drought and higher temperatures.  The result is the medians look untended and many of the landscape plants have died.

(There is one block on Guerrero between 19th and 20th Streets that is a model of how the median should look, however this stretch is maintained by a dedicated resident.  Outside that one block, the median plants and trees do not look healthy.)

In Japantown on the 1800 block of Sutter St where the cherry blossom trees were recently replanted, there are several other street trees that are not watered and look unhealthy.

A friend who lives at the west side of the Richmond District reports that there are several dead young trees near his home, sadly still with their stakes and empty water bags.

This project is one shining example of new-planted trees trees that are well-watered and well-maintained.  And, it’s a neighborhood volunteer effort for about 150 newly-planted trees along 24th St and on side streets.  The project has more than 70 volunteers who water the trees weekly using 30-gallon water tanks mounted on pushcarts.  (See the photo above of my grandchildren demonstrating how the carts are used.)

The 150 new trees in the neighborhood were  planted by the city and Friends of the Urban Forest (FUF) with the agreement that residents would water the trees, 20 gallons per tree per week, for three years.  As a volunteer with Mission Verde I can attest to the dedication of the resident watering teams.

BUF made it clear that Mission Verde must deliver 20 gallons of water per tree per week, for three years.  In North Beach, and other parts of the city, BUF watering crews (who use trucks carrying large tanks) are delivering perhaps half the water that BUF insists Mission Verde must provide, and half the water that BUF’s own publicity says it provides.

Without proper watering many newly-planted trees die and must be removed.  Under SF law governing DPW and BUF, whenever a street tree is posted for removal, the public must be notified and if a tree removal is protested, a Public Works hearing is set. The public may attend and argue that a tree should not be removed.

In 2019 BUF decided that holding a tree removal hearing for a small dead tree was a waste of their time, and so invented a new tree removal criterion called a “24-hour Emergency Tree Removal” notice.   Printed at the bottom of the notice is, “this notice  cannot be protested.”  While most tree removals are also posted online by BUF, “24-hour Emergency Tree Removal” notices are paper postings on trees only.

The way we know about “24-hour” postings is to put in a Public Records request for them.  During one period in Summer 2020, the number of 24-hour postings was three times the number of regular removal postings.  In other words, 3 in 4 removals were done without a public hearing.  Of the 60 trees with “24-hour” postings, more than half were still standing two months after posting, and in fact a few of them were still in place more than one year later.

What can the public do?

We know that BUF can water all trees, as it did in North Beach on June 1 and June 8, 2021, and as it insists that Mission Verde watering crews must do.  Let’s encourage our Supervisors to help get BUF back on track and require the same high level performance from their crews

After all, with the climate crisis upon us, and San Francisco with the smallest tree canopy of any major US city (we’re at 13% and LA is over 20%), we really have no choice but to get as many trees as possible added to our urban forest.